In October 2018, historians from Norway, Russia, Serbia and Germany came together in Berlin-Karlshorst. At a colloquium in the German-Russian Museum they spoke about the Nazi forced labour in Europe and Norway, and in particular about Norway under the German occupation. At the same time the colloquium was the public start of the Research Theatre Project BLODVEGER. From becoming personally acquainted and the mutual exchange, a collaboration developed that would lead a half-year later to a theatre performance: the German historians presented it in Berlin and Narvik, and with focus on the respective country, in excerpts in Skinnskatteberg, Belgrad and Archangelsk. After their return, the German historians reported back in Berlin on what they had seen and their experiences; finally, the website www.blodveger.info was launched in six languages.

The focus of the historical research and the stage production is the forced labour in German occupied Norway, from the eyewitness accounts of Soviet and Yugoslavian forced labourers; added to them are reports from the Norwegian civilian population as well as German letters from the front and official correspondence. In these, individual fates become equally as visible as historical contexts.

In Hitler’s directive of March 1940 for the German invasion of Denmark and Norway, the strategic and economic grounds become clear. From the beginning, the security of “our iron ore in Sweden” and the expansion “for the war navy and air force as a home base against England” are cited. During the five-year occupation Norway remained an area of operations. Fortifications and transport routes were built: the Atlantic wall was to begin along the Norwegian coast and serve as the deployment zone for the northern offensive on the Soviet Union. On the day of capitulation – in Norway on May 8, 1945, as in the rest of Europe – there were approximately 400,000 soldiers stationed in Norway; among the population of less than three million, one in seven was a soldier. Norway was to be an integral part of a European economic region under German hegemony. For the race ideologists Norway was at once part of a Greater Germania. The German rule developed Norway, de facto, through the so-called Reichskommissariat, into an imperialistic rule of tyranny.

At this time, the German civil administration, Wehrmacht and the paramilitary work organisation Todt were almost the only employers that companies, workers and other civilians could interact with.

The spectrum of behaviour ranged from political, administrative and economic collaboration to open resistance and manifested itself in the smallest of acts.

The construction activities – fortifications, roads, railway lines, harbours, airfields, and aluminium plants – were the dominant factor in economic and every day life. In the first year of the occupation alone 1,600 building projects were registered; by war’s end the Wehrmacht consumed for these, 95 % of the German Krone assets in Norway. Of 200,000 Norwegian industrial workers 150,000 were active in German construction projects. Norway was the only occupied country in Europe from which no workers were sent to Germany. And yet this building program was only possible through the use of forced labourers. As of August 1941, Soviet prisoners of war were deported to Norway; only half a year later to the German Reich. By 1944 there were approximately 100,000 of them; as well as around 4,000 forced labourers from Yugoslavia, 1,600 from Poland and 10,000 civilian workers; and also 2,600 German political and criminal prisoners. The forced labourers were interned in 600 camps guarded by the SS, the Norwegian Hird, the Wehrmacht, the Organisation Todt, the Nazi Reich Ministry of Justice and also private Norwegian firms.

We have gathered the stories of the forced labourers – a hundred thousand people. Some returned to their home as heroes, others as traitors. Some wrote books documenting their experience. Others have not even told their family what they went through in Norway after capture and deportation to the end of the world. How they did the harshest work – in some cases with intended extermination – and were subjected to an often-hostile nature and the tyranny of the guards. From them, 20,000 met their death in a criminal way, on strange soil, in mass graves. When the Soviet graves in Norway were excavated in 1951, only 2700 of the dead could be identified in 10,704 gravesites.

We set ourselves the task first to gather eyewitness accounts, then to bring them into a form that could be presented to a theatre audience, but was not a traditional piece of theatre. Something such as this could follow in a second phase. Presented here on our website is the research gathered by our group of historians. What they have to share is often heart breaking. 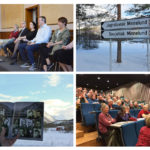